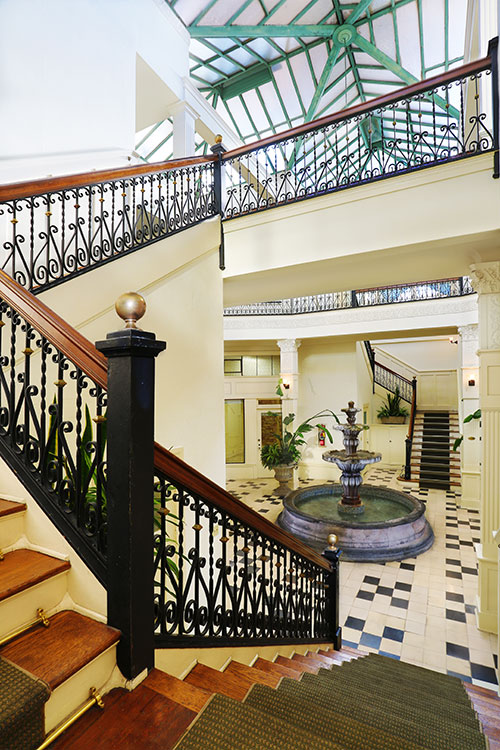 History of the Arcade Building

Upon its complete renovation in 1986, THE ARCADE BUILDING was awarded the Los Angeles Conservancy’s top Award for Preservation.

The beautiful three story ARCADE BUILDING marked an epoch in the retail history of San Pedro when it was built in 1925.  It was the first arcade building in the City and quickly became a landmark of distinction.  Built by Aleck Carresi, a San Pedro pioneer, it inspired others to invest in the future progress of the community.  Through the ensuing decades, the quality design and construction evidenced throughout the ARCADE has stood the test of time.  In the words of Aleck Carresi:

“From all that I sought counsel they discouraged me in the building of such a type of business building, but it is my belief that beauty and uniqueness is going to play a very important role in construction of buildings in the years to come.  Just four square walls, some plate glass and paint will not be sufficient for business buildings of the future.”

The site originally held a duplex known as Alessandro Flats, built by Alessandro (anglicized to Alex) Carresi. Carresi had a vision conceived from childhood memories, inspired by a building in his hometown in Italy. With the help of these memories and an architect, plans for the Arcade Building were born. In 1924, in a heroic effort to preserve this family’s home, part of the duplex was raised and supported while the Arcade was built underneath it. The former duplex became a penthouse, with a view of the harbor. Because Carresi was determined to create a structure that was both beautiful and unique the construction cost $80,000–enough to build a six-story building at the time.

Today, over 75 years later, Mr. Carresi’s words and commitment to excellence seem even more important and insightful.  His inspiration is still alive in San Pedro, and has resulted in the complete restoration of the ARCADE.  The original architectural beauty shines through like the brilliant sun through the ARCADE’s magnificent skylight.  Carved columns, rare Italian tiles, the intricate wrought iron balcony and central fountain all represent yesterday’s elegance, available to you today.